James Gunn, who is well-known as the director of 'Guardians of The Galaxy' franchise has now revealed that he would not wish to direct a 'Star Wars' film.

James Gunn has evidently been vocal about his love for films and franchises on his Instagram. The well-known director of the Guardians of The Galaxy franchise is often seen holding Q&A sessions on his Instagram. As the Coronavirus pandemic is discouraging people from attending public places, James Gunn too had previously declared that he is going into self-isolation. Now, during a self-isolation Q&A session on Instagram, James Gunn revealed that he won't be interested in making a Star Wars film.

James Gunn was answering various questions from fans where he was asked whether he would like to direct a Star Wars franchise film or any other franchise except for the ones he is already associated with. To this, the director replied that the Star Wars franchise doesn't interest him as a filmmaker and thus he wouldn't want to direct a Star Wars film. Besides this, the director stated that he cannot think of joining any other franchise as he is happy being associated with the franchisees under his kitty already. Check out James Gunn's reaction below:

Also read: 'Guardians of the Galaxy 3': James Gunn says the film will conclude stories in Vol 1 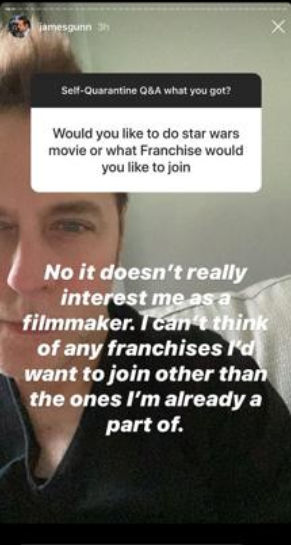 James Gunn recently wrapped the shooting for his upcoming film The  Suicide Squad which features a multi-starrer cast. The film will feature Margot Robbie, Idris Elba, Jai Courtney, John Cena and Pete Davidson along with an ensemble cast. The Suicide Squad is scheduled to release on August 6, 2021. Besides this, James Gunn will also return to his Guardians of The Galaxy franchise with a third instalment soon.