Taking to Instagram, Jennifer Winger posted a picture on her story where she can be seen having fun with her Beyhadh 2 co-stars Shivin Narang and others.

Beyhadh is an Indian romantic thriller television series. The season 2 of the show started premiering from December 2 and has received massive response and love from the fans. The plot of Beyhadh 2 is based on the life of Maya Jai Singh, who is left heartbroken when a man namely MJ betrays her. Maya is filled with hatred and decides to avenge herself by destroying his family. The revenge drama stars Jennifer Winget, Shivin Narang and Ashish Chowdhry in pivotal roles.

ALSO READ| Beyhadh 2 Written Update For December 19: Who Will Lose For Maya's Victory?

The series has been winning hearts by hitting the right chords of the viewers. The powerful portrayal of characters and the intrigued storyline has made the series more appealing to the audiences. Beyhadh 2 has been creating a lot of buzz on social media because of its dangerous shoot scenes. Beyhadh 2 saw Jennifer Winget repeating the role of Maya who is revengeful and cold-hearted. 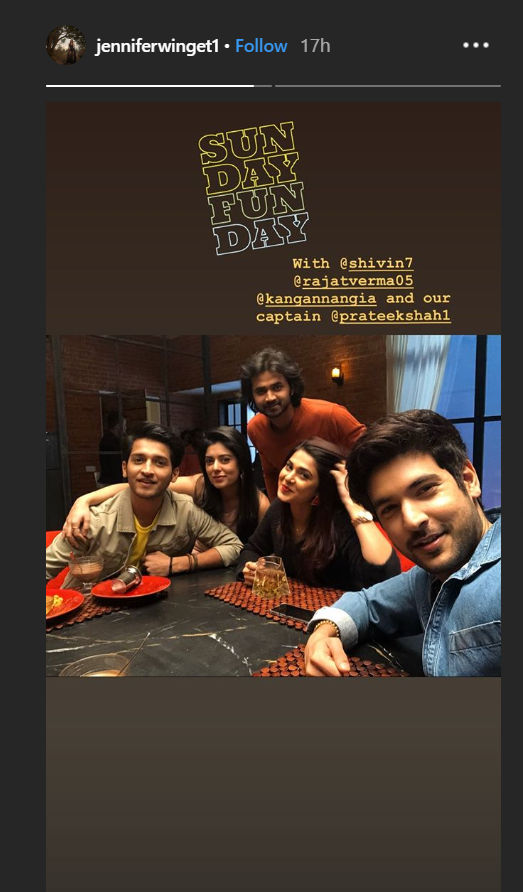 The entire cast of Beyhadh 2 has been spotted hanging out together several times. They are known to have a good rapport with each other and their social media is a testimony to it. Taking to Instagram, Jennifer Winger posted a picture on her story where she can be seen having fun with her Beyhadh 2 co-stars Shivin Narang, Kangan Nangia, Rajat Verma and the director of the show Prateek Shah. Everyone's all smiles in their weekend getaway picture.

Jennifer Winget is seen looking absolutely chic in a black dress while Shivin Narang has worn a blue denim jacket. All of them are seen enjoying their weekend to the fullest in the picture. Stay tuned for further updates about Beyhadh 2.