Shoaib Ibrahim Gives A Savage Reply To A Troll On Dipika Kakar, Earns Respect From Fans

Shoaib Ibrahim gives a savage reply to a troll on Dipika Kakar's smile. Shoaib earns respect for the savage reply. Read ahead to know more about it.

He has gained over 9.5 lakh subscribers and has even crossed more than 30 lakh views on some of his videos. Shoaib Ibrahim and Dipika Kakar both share many life updates through vlogs on Shoib's Youtube channel. Shoaib Ibrahim's wife. Dipika Kakar was a part of the famous show Sasural Simar Ka. Recently on Instagram, Shoaib Ibrahim started a questions round on his Instagram handle. He gave a savage reply to one of the people. Read ahead to know more details about this.

Shoaib Ibrahim gives a savage reply to a troll

Yesterday on February 2, the popular TV actor, now a Youtuber Shoaib Ibrahim started a questions round on his Instagram Handle. One of the trolls said "Deepika smile are so fake" to which Shoaib replied that he is sure that the person who wrote that must have a good smile. He even added that we should appreciate what we have close to us instead of trying to find the flaws in someone else. He further added that he is even ready to give his life to see her wife's (Dipika Kakar) smile. Check out the picture below to see the savage reply : 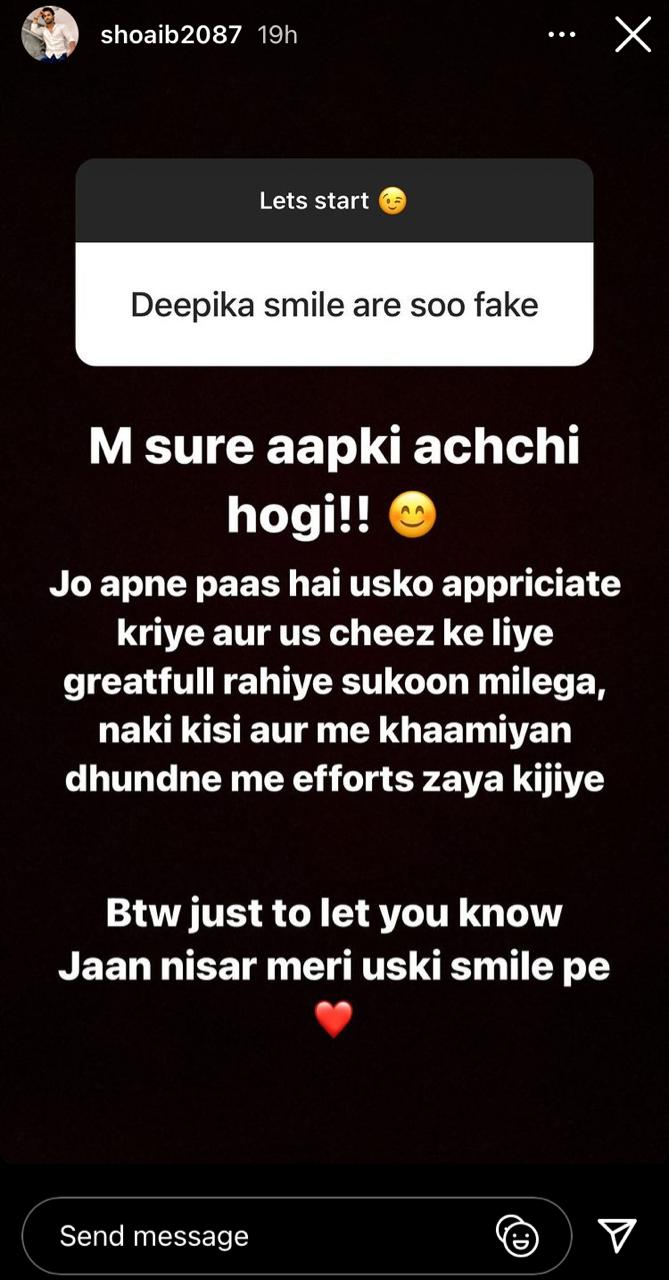 Shoaib Ibrahim was a part of the popular TV show, Sasural Simar Ka. Shoaib Ibrahim's wife was also a part of this show. They continued the chemistry of the reel life to real life. Shoaib Ibrahim made his Bollywood debut in the movie Battalion 609 in 2019. He was also a contestant in Nach Baliye season 8. In his latest vlog of Shoaib Ibrahim can be seen taking care of his home while her wife is having her periods. He also adds a line that has garnered a lot of respect from his viewers. He added that it's high time that we talk about menstruation normally. The video has got more than 26 lakh views in two days and is trending on number seven on Youtube today. See the Youtube video below: