Sourabh Raaj Jain Shares His Birthday Pictures With A Hilarious Caption; Check Out

Sourabh Raaj Jain celebrated his birthday while vacationing with wife Riddhima. He took to Instagram and shared his birthday pictures with a funny caption.

Sourabh Raaj Jain is a popular face on Indian television and has worked in several Hindi TV shows over the years. The actor was last seen in Mahabharat where he portrayed the role of Lord Krishna on screen. The model turned actor recently shared a picture on Instagram where it looks like he is holidaying with wife Riddhima Jain. Read on to know about his latest post.

Also Read | From Nakuul Mehta To Mohsin Khan, What TV Actors Did The Whole Week

The Patiala Babes actor took to Instagram and shared a set of three pictures, two solo and one with wife Riddhima. Sourabh Raaj Jain's birthday post had him looking dapper in a black and white patterned shirt paired with blue-green reflectors while his wife looked pretty in a lime green dress with a white full-length shrug.

The couple can be seen posing at a beach in the pictures which Sourabh Raaj Jain hilariously captioned, "Shhhhhh don’t tell anyone it’s my birthday today" followed by laughing emoticons. The first photo of the post has Sourabh posing with one finger on his lips as if asking somebody to keep a secret. You can see the post here.

Sourabh Raaj Jain's Instagram picture was bombarded with fan comments as his followers dropped in birthday wishes for the actor and posted a lot of heart emoticons. While one fan wrote, "Happy birthday, please come live once", another one commented that his role as Lord Krishna in Mahabharat was commendable. His fans wished him with his screen names in the comments. See the fan reactions here. 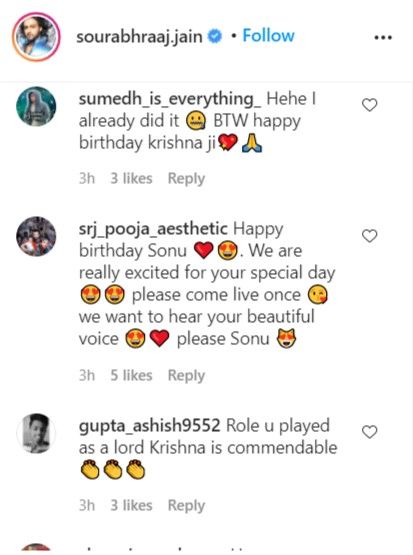 Sourabh Raaj Jain started his career in 2004 with Remix and has played many unforgettable characters on Indian television shows since then. His most famous roles include Lord Krishna in Mahabharat, Chef Neil Oberoi in Patiala Babes, Rohit Chopra in Kasamh Se and Yuvraj Singh Bundela in the hit show Uttaran. He also participated in the celebrity dance reality show Nach Baliye along with his wife Riddhima Jain in 2019. He shot to fame with the 2011 show, Parichay, produced by Ekta Kapoor, where he portrayed the character of Anand Raj Chopra.