Arjun Kapoor has been really active on social media and he certainly does make the most out of it. He has been sharing a number of posts on his Instagram profile. The actor also has a knack of trolling his friends and family members on their respective social media handles. He recently took to his Instagram story to share what he feels about the now trending stand-up comedy show, Yours Sincerely, Kanan Gill. The actor shared a small video along with a picture of Kanan Gill’s special on Netflix. Read more to know what Arjun Kapoor said about Yours Sincerely, Kanan Gill. 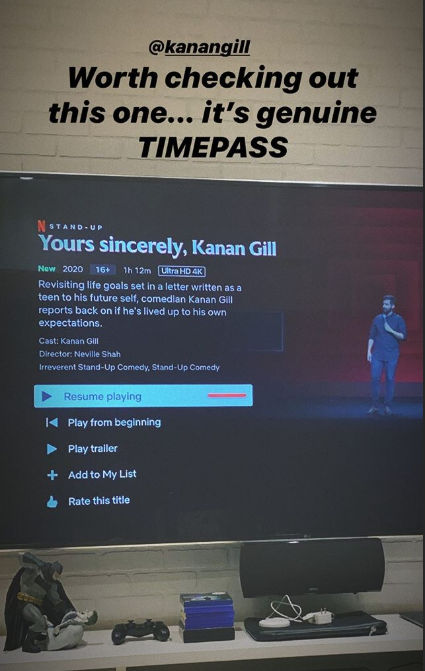 Arjun Kapoor recently took to his Instagram to share his views about Kanan Gill’s Netflix debut. He said that he “really was laughing out loud” after hearing some of his jokes. Arjun Kapoor also felt that his special was relatable and appreciated Kanan for his sincere efforts to produce something funny. He ended the video by saying that his work is good and shared a picture of Kanan’s show on Netflix. Other than Arjun Kapoor, a number of other people have been sharing their thought about Kanan Gill’s Yours Sincerely, Kanan Gill. They have taken to their social media accounts to share their expressions about the stand-up special. Here are some fan reactions to Kanan Gill’s Yours Sincerely, Kanan Gill.

Kanan Gill’s special ‘Yours Sincerely’ is a beautiful metaphor presenter like a heartfelt Simile. :) It’s my current favourite on Netflix, rooted in the Indianness yet has a universal AF. It’s Indian comedy arriving BIG on the global comedy sceneðŸ¤¤â¤ï¸
Just too sexyðŸ˜°ðŸ”¥@KananGill pic.twitter.com/00CgWk0KZC

Out of all the comedy specials out there in the country. This one is on some another level. @KananGill is an OG. #Yourssincerely pic.twitter.com/Ik6hG5Oclf

Also Read | Arjun Kapoor Says Critics Can 'tone It Down'; Admits He Can Be A Better Actor

PEOPLE HAVE PLEDGED SO FAR
LATEST NEWS
View all
1 day ago
Perry Mason trailer: Matthew Rhys' series depicts the dark, gruesome streets of LA
2 hours ago
Was Jeffrey Epstein in the military? Know all about the mystery pic that has gone viral
1 hour ago
Web series on Zee5 and Hotstar co-produced by Rohit KaduDeshmukh to release soon
4 hours ago
'Raktanchal' ending explained: A final face off between Waseem Khan and Vijay Singh
2 hours ago
'Kenny Sebastian: The Most Interesting Person in the Room' drives on failed expectations