Rashid Khan's comment on David Warner's Instagram post where he is seen holding a kite stole the show and left everyone in splits. Read to know more about it.

Australia defeated India in the first ODI on Tuesday. Australian opener David Warner created history by becoming the fastest from his country to reach the 5000-run landmark in ODIs. But Warner was involved in another bizarre moment during the first ODI between India and Australia, play was interrupted for a few minutes when a kite landed on the field at the Wankhede Stadium in Mumbai and that caught everyone’s attention.

ALSO READ | MS Dhoni showered with love on Twitter, 'Dhoni We Need You' trends ahead of Ind vs Aus ODI

It all happened in the 49th over of the Indian innings when a kite landed on the field, causing a brief delay before the end of India’s innings. And as soon as the kite landed on the field, David Warner picked it up and handed it to the umpire. The southpaw was seen pointing at the sky as it looked like the thread of the kite got entangled in one of the Spidercam wires. Post the match, David Warner took to Instagram to post a picture of himself holding the kite and pointing towards the sky as he wrote, “Caption this.”

Soon Indian fans started flooding the comments section as they were stoked with David Warner’s post. They wished the Australian ‘Happy Makar Sankranti.’ But what stole the show was a comment from Afghanistan's spin sensation Rashid Khan who responded to David Warner’s picture holding a kite and captioned it as: “There is another one coming into us, make sure you catch that?” Rashid Khan and David Warner share a great camaraderie and are set to play in the IPL 2020 for the Sunrisers Hyderabad. 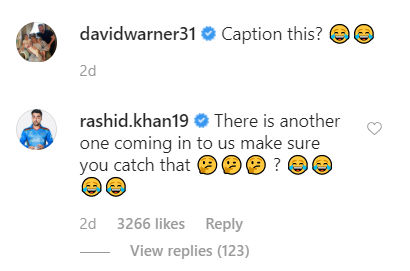 David Warner, who has been in sensational form off late, became the fastest Australian to breach the 5000-run mark in ODIs during the first ODI against India on Tuesday at the Wankhede Stadium in Mumbai, achieving the same in 115 innings. Warner became the third-fastest player to reach the milestone behind Hashim Amla, who took 101 innings and Viv Richards and Virat Kohli, who achieved the feat in 114 innings. The New South Wales batter brought up a century to help his side win the match without losing a wicket in the chase.

ALSO READ | Ind vs Aus 3rd ODI: How to buy tickets for upcoming game in Bengaluru? Here's your guide