India's opener Rohit Sharma might have looked slightly out of touch in the T20s against the Windies after a string of low scores but has not toned down his witty and humorous rebukes on social media. Out of favour middle-order batsman Kedar Jadhav has been on the HitMan's social media radar for quite some time as Rohit has made countless sarcastic and mocking comments to Kedar Jadhav. Just a few days earlier, Kedar Jadhav was trolled by Rohit after posting a picture of himself padded up for training and was asked by the HitMan to focus on his batting skills rather than posing. Days later, Kedar Jadhav took to Instagram to post a photo of himself in an 'authentic' look, motivating users with a 'fearless Monday' caption. However, Jadhav was taken down by Rohit as the opener took to the comments section to make fun of Jadhav and sarcastically commented 'Zeher bhai Zeher'. 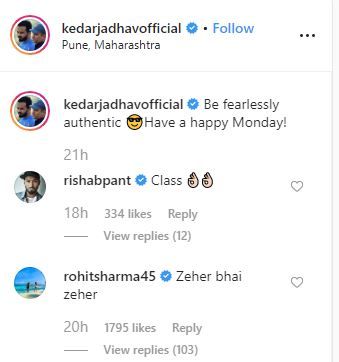 READ | Shastri Calls Dhoni A 'legend', Says He Would Never Impose Himself On Team India

Indian batsman Kedar Jadhav has not been able to cement his spot in the national limited-overs sides ever since the 2019 edition of the ICC Cricket World Cup in England and Wales. His only decent innings came against Afghanistan at the Rose Bowl in Southampton. Jadhav scored 52 crucial runs after India were put under pressure by Afghans. Besides that, Jadhav has scored 2 hundreds and 6 fifties in his ODI career. The Pune-based player has played 9 T20Is, scoring only 122 runs at an average of 20.33 before getting dropped. The right-hander recently played in the 2019-20 Syed Mushtaq Ali T20 Trophy. He had a disappointing tournament as he scored a solitary half-century against Hyderabad in Chandigarh. Later in the tournament, he also got an unbeaten 47 versus Baroda in Surat. After a break from cricket, Jadhav has now returned to the field and he was delighted about it. He uploaded a picture on Instagram where he was seen getting ready to face the bowlers. He wrote, “Feels good to be back on the field and do what I like to do.”