'In Perth A Star Is Born': 1992 Article By Peter Roebuck On Sachin Tendulkar Trends Online

A 1992 article of Peter Reobuck 'In Perth - A Star is Born’ highlights a young Sachin Tendulkar's Test century during his first trip to Australia in 1991/92.

A Sachin Tendulkar-based 1992 article ‘In Perth – A Star is Born’ by late English journalist Peter Roebuck has recently resurfaced online. The article highlights one of Sachin Tendulkar’s earlier Test centuries, more specifically the one where he scored 114 against Australia in 1992. Tendulkar was aged 18 at the time and he overcame a four-pronged pace attack of Craig McDermott, Merv Hughes, Paul Reiffel and Mike Whitney on a lively WACA track to bring up his third Test ton.

In his article, Peter Roebuck praised young Sachin Tendulkar for displaying toughness and having an apt technique in challenging conditions. He credited the ‘Little Master’ for showing no fear to pace and rising deliveries and described the child prodigy as a “gutsy cricketer”. Peter Roebuck also mentioned that witnessing the right-hander’s innings live in Perth was one of the privileges of his life. 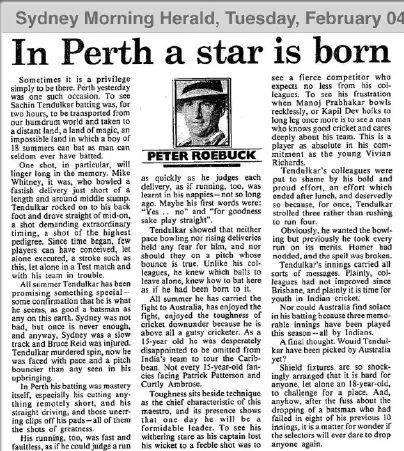 In hindsight, an 18-year old Sachin Tendulkar scored 114 from 161 balls on his first trip ‘Down Under’ when all his experienced teammates struggled to cope with the pace and aggression of the Australians. India were bowled out for 272 to hand Australia a handy 74-run lead in the first innings. Despite Tendulkar’s efforts, the visitors lost the Test by 300 runs.

Having debuted in 1989, Sachin Tendulkar remained a mainstay of India’s batting order till the day of his retirement in 2013. Throughout his 24-year journey, he claimed many major batting records, which still remains unscathed to date. The batsman is credited for scoring most international runs (34,357 runs) across all formats and is the only cricketer to register 100 international centuries. He was also part of the Indian team that lifted the 2011 ICC Cricket World Cup.