The former Indian spinner Harbhajan Singh posted a video clip of him with fellow cricketer Yuvraj Singh on a talk show, that left Virat and Rohit laughing.

If you need some mid-week entertainment from the world of sport, head over to Indian cricketer Harbhajan Singh’s Instagram feed. The off-spinner posted a throwback clip of his with fellow cricketer Yuvraj Singh on a talk show, which will have you in splits. Indian captain Virat Kohli and cricketer Rohit Sharma also found the post hilarious on Wednesday, November 20.

In the video, both cricketers are seen playing a form of charades on the show – where Yuvi had to guess a word, and Bhajji had to help him get the correct answer. The video shows Bhajji ask his former teammate, ‘Khet main kya hota hai.’ Yuvi, while attempting to guess the right answer, made a gesture that had everyone in splits. In the video, amidst all the comedy, Bhajji asks Yuvi what his gesture means and then bursts into uncontrollable laughter. 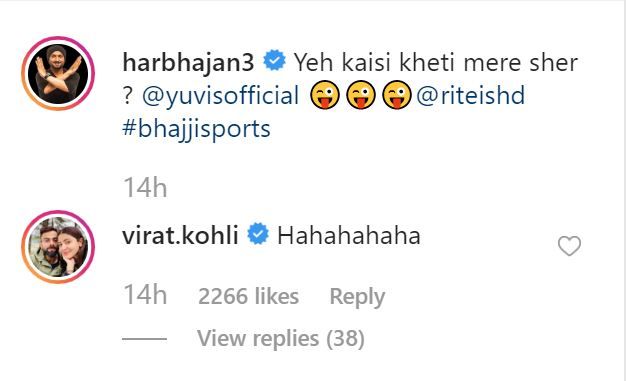 While posting the video, Bhajji commented, “Yeh kaisi kheti hai mere sher, and tagged Yuvraj Singh. Indian skipper Virat Kohli shared the humour, as he commented on the post with a series of laughing face emojis. Meanwhile, Sharma wondered why he kept mentioning ‘Kheti’ all the time.

Partners in crime🤝.. Crime : stealing doubles from fielders at the boundary 😃. Guess who 🤔 pic.twitter.com/Gk1x6lBIvm

Yuvraj and Harbhajan have known each other for some time, having played for Punjab and later Team India. The video was from their time on the show 'Yaaron ki Baarat' hosted by Riteish Deshmukh and Sajid Khan.