Zenon Fortnite ban has evidently enraged a number of Internet users as they are criticising the game for banning a nine-year-old streamer. Read details below.

Fortnite is one of the most famous battleground games around the world and it is known that the game bans users regularly for cheating on the battleground or due to other various reasons. This time around, when Fortnite banned a nine-year-old streamer from Brazil, it quickly turned into a virtual moment as more and more people started to weigh in on the matter. Within no time, a number of netizens came up to the support of Zenon and wished for Fortnite to lift the ban on Zenon.

Also read: Where is Hydro 16 located in Fortnite and how to reach Compact Cars?

The nine-year-old streamer from Brazil named Zenon has been playing Fortnite under the supervision of his father. Recently, the streamer joined an Arena Mode match where only players above 13 years of age are allowed to play. There was no money involved in the Arena Mode match, Zenon got banned from playing Fortnite entirely for 1,459 days i.e four years. Technically, the ban tenure ends when Zenon would reach the age of 13. The video of Zenon getting banned from Fortnite is also doing rounds as the little streamer bursts into tears after knowing he has been banned. Check out the video below -

pic.twitter.com/eO0Vv0Ew3u#FreeZenon
Just because he can’t compete in Arena doesn’t mean u have to ban him from the whole ganeðŸ¤¦ðŸ¾‍â™‚ï¸ðŸ¤¦ðŸ¾‍â™‚ï¸

As the controversy broke, a number of Fortnite players started tagging Epic Games in their tweets asking them to lift the ban. While some users were quick to comment that Zenon was underage to play Arena Mode game, some also sympathised with him as there was no money involved in the specific game Zenon was playing. A number of famous steamers like Ninja have also weighed in on the issue.

Unless Arenas start offering money for placements there is no reason for #FreeZenon to be banned from them until he turns 13. That being said the age requirement to compete in Fortnite is 13 and he is 9. He shouldn’t be banned from any other aspect of Fortnite 100% @FortniteGame

Also read: How to get neon wings in Fortnite through Fortnite Party Royale rewards? 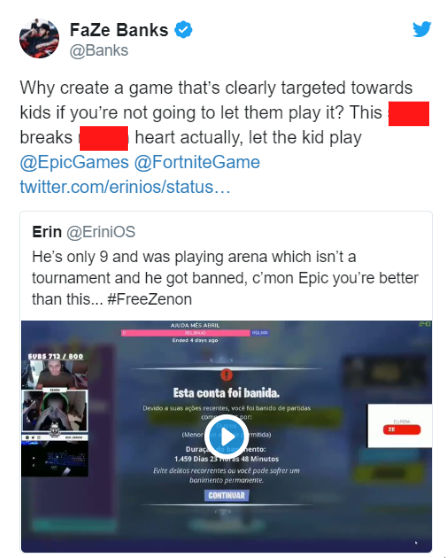 Also read: What is Party Royale in Fortnite and what are rewards for attending the event?

Also read: How to enter Fortnite Spray Contest and what are the rules for participation?

PEOPLE HAVE PLEDGED SO FAR
LATEST NEWS
View all
1 day ago
Legends of runeterra patch notes 1.2 bring major buffs and nerfs to champions
1 day ago
Skyrim grandma takes a break from youtube streaming due to harsh internet trolls
20 hours ago
What is gta freemode challenge and how to participate in this challenge?
18 hours ago
Xbox friends list not working: issue preventing users from teaming up on popular titles
2 days ago
How to stream on xbox one: stream xbox gameplay on twitch and mixer