OnePlus 8 Pro devices recently received an Oxygen OS update which has emphasized on fixing camera bugs and bringing overall stability to the device.

OnePlus released their latest range of smartphones i.e OnePlus 8/8 pro on April 14, 2020. The company launched these devices in Europe, India and the USA respectively and have been receiving a positive word of mouth from reviewers and real-time users. But, on the other hand, various bugs and display issues surrounding the device have also been reported.

The latestOxygen Os update was spotted on Reddit and the OnePlus community homepage. The new Oxygen 10.5.6 update brings a 122 MB update fro the international variants of the OnePlus 8 Pro devices. The software update is recently rolling out to users through OTA. Official OnePlus forum post about the update has not been posted yet. Check out screenshots from the latest update below - 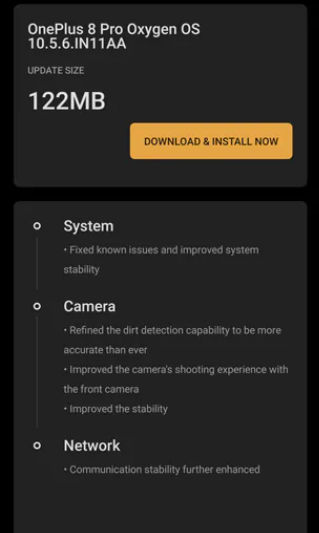 Many users on the OnePlus forum are also complaining about the OnePlus 8 Pro display performing below expectations. As per reports, users have spotted crushed blacks, green tints and low brightness on the new premium device. The green tint display issues have been addressed by the company but it is not sure when a software update to fix it will be released.

Also read: OnePlus will now send a local company repair engineer to your house to fix your phone

Also read: How to hide apps in OnePlus smartphones & how to easily access Hidden Space; read