Janhvi Kapoor took to her Instagram account earlier today to wish her Dostana 2 director, Collin D'Cunha on his birthday with BTS pics from the sets. Read on.

Janhvi Kapoor has quite a line up of films currently. Among them is the sequel to 2008-release, Dostana. Recently, on her Instagram story, the actor wished her Dostana 2 director, Collin D'Cunha on his birthday. The post had some BTS pictures from the sets of Dostana 2 and this also seems like a treat for the fans.

Earlier in the afternoon, Janhvi Kapoor on her Instagram story posted a birthday wish for her Dostana 2 director, Collin D'Cunha. She also added a caption saying, "can't wait to be on set with you again". The picture collage that Janhvi used was made up of BTS pictures of her and D'Cunha's moments from the sets of the upcoming film Dostana 2. 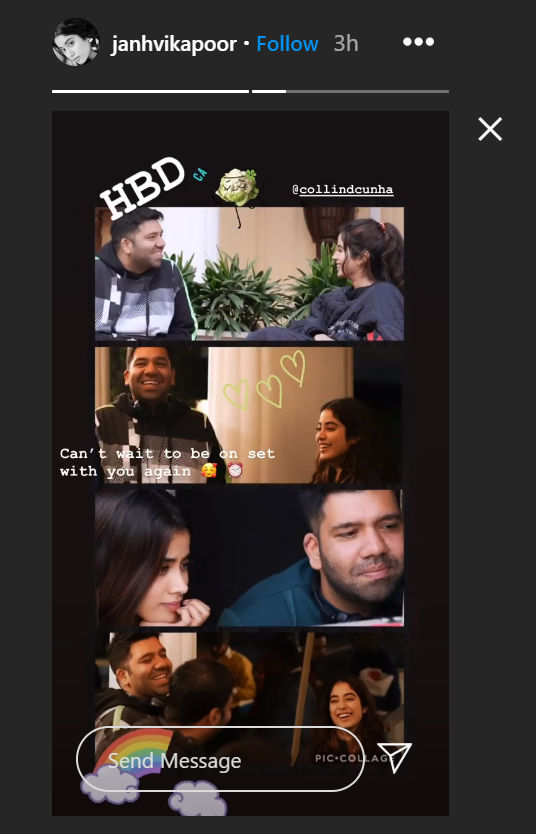 Also Read: Kartik Aaryan Defends His Role Choices After Being Criticised For Films Like 'Dostana 2'

Dostana 2 casts Janhvi Kapoor and Kartik Aaryan in the lead. The movie also features Abhishek Banerjee, Kiron Kher, Asha Bhat and others in important roles. Directed by Collin D'Cunha, the movie is expected to release some time in December 2020. However, due to the Coronavirus pandemic, the shooting has been halted for the moment.

Also Read: Kartik Aaryan Bonds With His Choreographers On The Set Of 'Dostana 2'

Janhvi Kapoor was last seen in the Netflix Original, Ghost Stories directed by Dibakar Banerjee, Zoya Akhtar, Anurag Kashyap and Karan Johar. Before the Coronavirus lockdown, she was busy with the shooting of Gunjan Saxena: The Kargil Girl and Dostana 2.

PEOPLE HAVE PLEDGED SO FAR
LATEST NEWS
View all
1 hour ago
Twinkle khanna lives 'proud mom moment' with chocolate cake; calls son 'future baker'
20 mins ago
Kangana ranaut reveals she's 'uncertain' about which medium she would make content for
39 mins ago
Vicky kaushal concerned about safety of people amid covid-19, says 'kaam toh hota rahega'
21 mins ago
Kareena kapoor starrers with more than one male lead; '3 idiots' to 'good newwz'
32 mins ago
These roles of kareena kapoor triumphed effortlessly as ‘firsts’ in bollywood