Neha Dhupia and Angad Bedi often engage in cute banter on the internet. Here is an instance of when Neha gave a witty reply to Angad's comment on her photo

Neha Dhupia and husband Angad Bedi are usually seen having a cute banter on social media. Neha is currently busy with her Roadies Revolution shoot. Recently she posted a picture of herself on her Instagram account and Angad Bedi made a hilarious comment.

Neha Dhupia is sporting a red tank top with red joggers and a red puffy jacket. She accessorised it with big gold hoops and a golden layered chain. She also highlighted her lips red and styled it in a sleek hairstyle. However, what seemed to have caught the attention of netizens is Angad Bedi’s comment. He wrote, “Oh teri keee!”. But Neha also gave a similar reply saying, “Oh teri kneeee”. 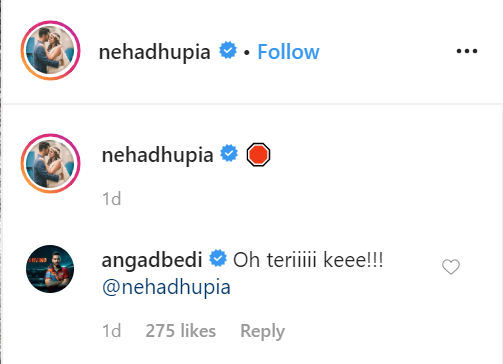 Also Read: Neha Dhupia And Angad Bedi Are The New 'Raj And Simran'; See These Pictures To Believe

Also Read: When Neha Dhupia Amped Up The Glam Quotient With Her Stunning Fashion Statements

Previously too, Neha Dhupia had cracked similar "knee" jokes. On another photo of hers of Instagram, Neha had captioned it "KNEE-ON". Even in this photo she was sporting athleisure outfit and seem to look like a real boss lady.

Also Read: Rani Mukerji In A 'funny Side Up' Avatar With Neha Dhupia Reveals Key To Look Beautiful

Meanwhile, Angad Bedi and Neha Dhupia's banter on the internet is quite frequent not to mention a tad bit adorable. The two are constantly seen pulling each other's leg. However, they never fail to give couple-goals when posing together. The couple also welcomed a baby girl in 2018 called Mehr. 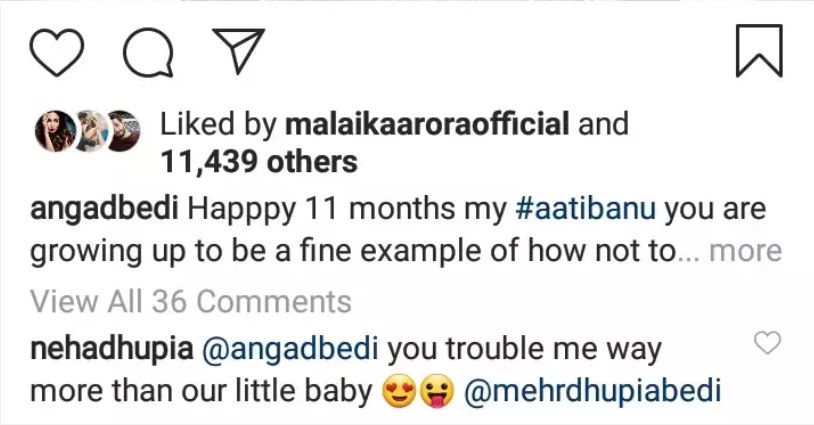 Also Read: Neha Dhupia's Bold Fashion Sense Is Exactly What You Need To Dress For A Party