Gwyneth Paltrow's gesture of auctioning her Oscar 2000 dress for the COVID-19 charity backfired as netizens slam her gesture. Read on to know more about this.

Hollywood actor Gwyneth Paltrow recently decided to auction off her Oscars 2000 dress for Leonardo DiCaprio's charity. 'All-In-One Challenge'. However, it seems her kind gesture has backfired while followers even slammed her for it. Apparently, her Oscar 2000 dress is Paltrow's "least" favourite and this revelation did not sit well with netizens.

The dress in question is a hand-beaded silver creation by Calvin Klein that Gywneth Paltrow wore the Oscars red carpet. Adding a post on her social media about her donation, Paltrow wrote the dress held sentimental value for her. She also told her Instagram followers that she chose this dress because “It’s very end-of-the-’90s, which is back in style now" and also, "it was a good one to donate".

However, this statement seemed to have contradicted Gywneth Paltrow's earlier opinion about the dress. The actor was earlier quoted saying, "It’s an okay dress but not Oscars material. I chose it because I wanted to disappear that year". This was not well received by some of her fans who thought the actor was not being kind in gesture.

Also Read: Gwyneth Paltrow Was Fired From Her First Job At The Age Of 12; Know Why Here

Also Read: Gwyneth Paltrow Gets 'moral Support' From Her Kids While Working From Home

Also Read: What Gwyneth Paltrow Eats In A Day? Check Out The MCU Star's Diet Plan 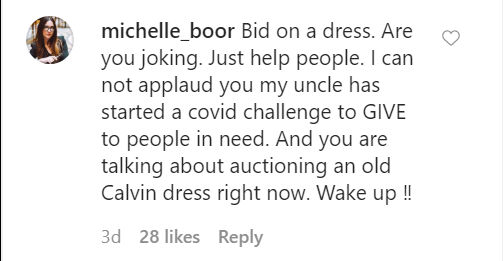 Meanwhile, Gwyneth Paltrow is one of the many celebrities who pledged their support for the challenge. Matthew McConaughey reportedly announced that his donations would allow a fan to accompany him to a University of Texas football game. Ellen DeGeneres donated $1 million to the cause. All the proceeds from the challenge will reportedly be given to Meals on Wheels, No Kid Hungry, The World Central Kitchen and America’s Food Fund.

Also Read: 'The Goop Lab With Gwyneth Paltrow': When Will It Release On Netflix?