Dark Family Tree: Nielsen To Dopplers, See How The Families Are Related

The Netflix show Dark Season 3 is finally streaming on the platform. Read on to understand the complex family tree in this final season of the show

Dark on Netflix has woven a very complex tale of interconnected family relations and it has literally given all of this a twist of time. Dark Season 3 released on Netflix on June 27, 2020, thus making this staggering story even more compelling for the viewers. Here is everything you need to know about Dark Season 3 family tree.

Dark season 3 family tree gets more mind-boggling and even more confusing. There are a plethora of characters who are travelling back and forth in time. Hence, it becomes increasingly difficult to keep a track of who’s where and is doing what. Here is a simplified version of the Dark Season 3 family tree.

Jonas’s story is possibly one of the most interesting ones, as it spans over a century. The constantly repeating moto of Dark “The beginning is the end and the end is the beginning” doesn’t fit anyone else's story as well as it fits Jonas’. Jonas is literally the starting point of his family and is the end as well. Here is how his family tree works,

Jonas Kahnwald is the son of Michael Kahnwald, (who is actually Mikkel Nielsen by blood) and Hannah Kruger. Mikkel Nielsen is the son of Tronte and Jana Nielsen. When it comes to Tronte Nielsen, until Dark Season 2, his parentage was a big question for the viewers, as only his Agnes was known to us. However, Dark Season 3 finally unveiled the mystery of Tronte’s father.

#dark #Netflix #DarkNetflix
For all those who are extremely confused with timelines and relations but still can't stop watching. Hope this gives a little clarity ðŸ‘‡#darkfamilytree pic.twitter.com/8r8LaEes7P

Read | 'Dark' series quiz: How well do you remember the Netflix series?

Tronte’s father is the Unknown Man, who travels with his younger and older self. This Unknown man is actually Jonas and Martha Nielsen’s son. Hence Jonas is the beginning of his bloodline as well as its end. In addition to this, Jonas is Martha’s nephew and also her great-great-grandfather. 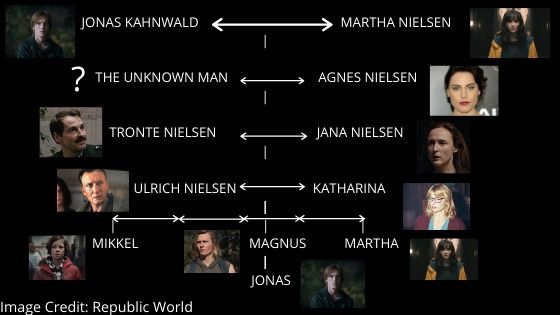 The Dark motto applies incredibly well to Charlotte’s family tree as well. Charlotte Doppler grew up as the adopted granddaughter of H.G Tannhaus. But the identity of her parents remained questionable until season 3. But Dark Season 3 has unveiled this mystery as well, after reading pages from Claudia Tiedemann’s diary, Noah, a time traveller, who is Adam’s follower, discovers true about himself. It turns out Charlotte is his daughter. Charlotte is presently married to Peter Doppler, and they have two daughters together, Franziska and Elisabeth.

One day after the apocalypse Peter and Elisabeth hide in a bunker, and Peter is killed while trying to save his daughter from a rapist. Following this incidence, Elisabeth runs into Noah. They eventually get married and have a daughter. And if you haven’t guessed it already, it’s Charlotte.

Baby Charlotte gets kidnapped and is never found again by her parents. The older Charlotte and Elisabeth steal Charlotte and take her to Tannhaus, who brings her up. Hence, in conclusion, Charlotte is Elisabeth’s mother and also her daughter. While Elisabeth is Noah’s granddaughter as well as wife. However, things get more interesting when viewers find out that Noah had a sister named Agnes.

In the future, as her daughter is lost and her husband travels across time to do Adam’s bidding, Elisabeth becomes a military overlord. And her right-hand person is Silja. Silja appears to be a loose thread in the story but she turns out to be as integral to the story as other characters.

Silja is actually sent back in time by Adam. She meets Bartosz in early 1990s. Due to the events in Dark Season 2 finale, Bartosz is stuck in the past with Jonas, Magnus, and Franziska. Silja and Bartosz get married and have a daughter and son. Their children turn out to be Noah and Agnes.

Read | 365 DNI effect: As Netflix's 'Love' also gets popular, here's a look at its stellar cast

After her terrible heartbreak, Hannah Kruger decides to start a new life in the 1950s. This is when she has a brief love affair with Egon Tiedemann and gets pregnant. She gives birth to a girl named Silja. Hence to sum it up Silja is actually Jonas’s half-sister. 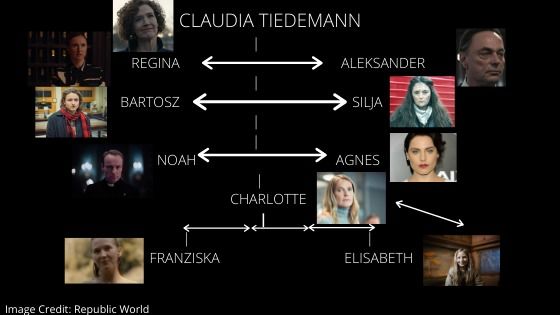 Read | How to sign up for the the 'Floor is Lava' season 2 on Netflix? Find out

Some loose threads in the Dark Family tree:

While most unsettling mysteries were revealed in Dark Season 3, some were left hanging by the thread. It is cleared that Regina is Claudia’s daughter, the identity of her father is not revealed. While most fans were speculating that it could be Tronte Nielsen, with whom Claudia had a love affair, it turns out to not be him. It is just clarified by the show’s creators that he is an outsider.

While it is confirmed that Peter is the son of Helge Doppler, his mother never comes into the picture. Hannah and Katharina’s parents had nothing to do with Jonas’s bloodline, they became connected with it only when they got married. And finally, Jonas is the reason behind the birth of most of these people.

LATEST NEWS
View all
6 hours ago
Abhishek Bachchan speaks about 'Breathe', says 'the pressure to perform still exists'
1 hour ago
Vidyut Jammwal and Amit Sadh's 'Yaara' set to release on ZEE5 soon
1 hour ago
Sushmita Sen reveals 'one of her favourite scenes' of 'Aarya', says 'I kept crying'
5 hours ago
What time does 'Hanna' season 2 release on Amazon Prime? See the trailer, cast, and more
2 hours ago
'Gossip Girl Reboot': Eli Brown drops intriguing details about his character in the show