As the brutal Russia-Ukraine war enters day 84, Ukrainian forces have fulfilled their "combat mission" in Mariupol port city. Meanwhile, Sweden and Finland have announced their efforts to join NATO. On the other hand, European Union failed to reach unanimity on imposing a ban on Russian oil imports. 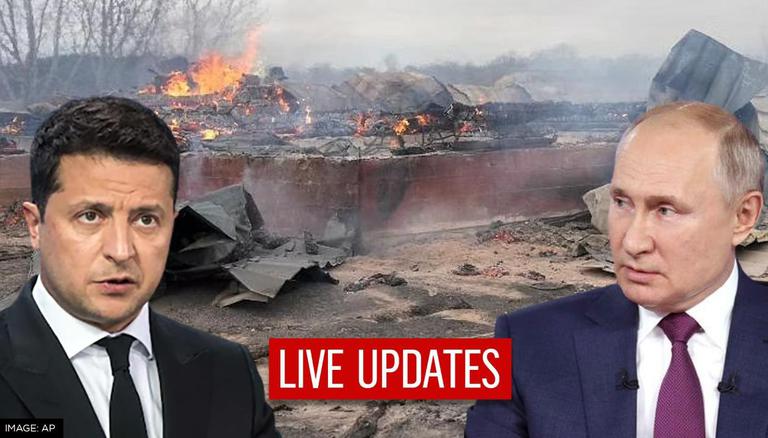 Russia says it told Sweden on Wednesday that its response to the Nordic nation joining NATO will be based on how the alliance deploys its military strength in the future. In a statement, the Russian Foreign Ministry said officials met with Swedish Ambassador Malena Mard at her request and that she notified Moscow about Sweden’s NATO ambitions. The Foreign Ministry said it responded that “the choice of ways to ensure national security is the sovereign right of each state, but together with that, it should not create threats to the security of other countries.”

Ukraine President Volodymyr Zelensky has signed a law on the extension of martial law in the country for the next 90 days. Notably, Martial law has been in force in Ukraine since February 24 after the Russian forces attacked the country.

The President of #Ukraine signed a decree extending martial law for 90 days. pic.twitter.com/gs7doXcI6X

Russia’s Foreign Minister Sergey Lavrov on Tuesday labelled the war in Ukraine as a conflict between Moscow and the West as he accused the United States and the UK of “blocking” the peace deal talks by manipulating the Ukrainian delegation in Istanbul. Speaking at an educational forum in Moscow on May 17, Lavrov publicly accused the United States and the United Kingdom of “exerting influence” over the Ukrainian negotiators and hindering the talks to allegedly "prolong the ongoing war" to kill more Russian soldiers.

Hours after Finland and Sweden submitted applications to join the North Atlantic Treaty Organization (NATO) Alliance, several countries came in support of the Nordic countries. In the latest development, Germany praised both the nations for their decision to join the US-backed military alliance despite Russia's apparent threat. Reacting to the membership application submitted to NATO, the first Deputy Spokesperson for the German government, Christiane Hoffmann, said Berlin wants Sweden and Finland to join the alliance as soon as possible.

A pro-government Turkish newspaper says Turkey has drawn up a list of 10 demands it will reportedly ask Sweden and Finland to meet before it can approve their NATO membership. The list published by Sabah newspaper on Wednesday calls on the two countries to stop any financial support to groups linked to the Kurdistan Workers’ Party as well as to Syrian Kurdish fighters whom Ankara views as extensions of the banned group. There are also demands that these countries halt contact with members of the Syrian Kurdish group.

Sabah said Turkey furthermore wants the two countries to “expedite” extradition proceedings for suspects wanted by Turkey on terror charges. The list also includes a demand that Sweden clamps down on what Sabah called a “disinformation” campaign against Turkey led by followers of Muslim cleric Fethullah Gulen, who Ankara claims was behind a coup attempt in 2016. Many followers of the Gulen movement have fled to Sweden.

The Ukrainian Intelligence Directorate of the Ministry of Defence has claimed that Russian armed forces have been "increasingly refusing" to carry out orders of the commands to conduct active offensive operations. The Ukraine's military intelligence has claimed that several units of the 70th Guards Motorized Rifle Regiment have "already openly refused" to participate in the war, according to the statement released by the Intelligence Directorate of Ukraine's Defence Ministry. According to Ukraine, Russian forces have refused to participate in the war and demanded that they must be returned to their places of permanent deployment.

A 21-year-old Russian soldier facing the first war crimes trial since Moscow invaded Ukraine pleaded guilty Wednesday to killing an unarmed civilian. Sgt. Vadim Shishimarin could get life in prison for shooting a 62-year-old Ukrainian man in the head through an open car window in the northeastern Sumy region on Feb. 28, four days into the invasion. Shishimarin, a captured member of a Russian tank unit, was prosecuted under a section of the Ukrainian criminal code that addresses the laws and customs of war.

According to the prosecution, in late February, Shishimarin killed a 62-year-old civilian in Ukraine’s northern Sumy Oblast during Russia’s retreat. Shishimarin pledged guilty and is now facing a life sentence for violating the laws of war.

The Czech Republic’s government has unanimously approved NATO membership for Finland and Sweden — just hours after the two countries submitted their requests. Prime Minister Petr Fiala said Wednesday he welcomes the Scandinavian nations’ decisions to join the alliance. He added that their militaries fully meet all necessary accession criteria. The accession protocol still needs to be ratified by both chambers of Czech Parliament, which is expected to happen soon. Fiala said he doesn’t anticipate any obstacles, as governing parties hold the majority in both chambers of parliament.

Hours after Finland and Sweden submitted applications to join the North Atlantic Treaty Organization (NATO) Alliance, Turkey has blocked the US-backed military alliance's initial process, Financial Times reported on Wednesday. Earlier today, NATO Secretary-general Jens Stoltenberg indicated the process of approving the first stage of Finland and Sweden’s application would be completed within one or two weeks, however, Turkey's latest move, has made it nearly "impossible".

Ukrainian President Volodymyr Zelenskyy took to the microblogging site to applaud the support package announced by the EU on Wednesday. Earlier today, the President of the EU Commission, Ursula von der Leyen announced a relief package of € 9 billion to Ukraine.

We will continue to be by Ukraine's side - throughout this war and when they start rebuilding.

We are proposing new macro-financial assistance for Ukraine of up to €9 billion in 2022. pic.twitter.com/zC1dTTq49o

Grateful for the support package for 🇺🇦 announced today by @vonderleyen: a new € 9 billion macro-financial aid program and a 🇺🇦 Recovery Platform. Such support will help 🇺🇦 win the war, overcome the consequences of RF's aggression & accelerate the movement towards #EU membership

The President of Serbia, Aleksandar Vucic, on Wednesday, met the new Ambassador of Ukraine, Volodymyr Tolkach and assured him to provide all possible aid to the war-ravaged country. He said that the Balkans country will take part in the reconstruction of Ukraine. While speaking with the newly appointed ambassador, he expressed regret over the current situation in Ukraine and informed him about the positions of the Serbian government and the National Security Council.
The Serbian President said that he always respects the territorial integrity and sovereignty of Ukraine as per the basic principles of international law contained in the Charter of the United Nations.

18:22 IST, May 18th 2022
Trudeau vows to support Sweden and Finland in accession process of NATO

AS Finland and Sweden submitted applications to join the North Atlantic Treaty Organization (NATO) Alliance, Canadian Prime  Minister Justin Trudeau vowed to support both countries in the accession process. “Canada strongly supports Finland and Sweden’s decision to pursue NATO membership. As a close friend and security partner, Canada will support Finland and Sweden through the accession process, including against threats to their security, " as per the statement released by PM's office. “Canada will continue to support the principles that have kept the countries on both sides of the Atlantic safe, free, and prosperous for over 70 years," it added.

We wholeheartedly endorse Finland and Sweden’s application to NATO. As a close friend and security partner, Canada will support both countries through the accession process. My statement: https://t.co/ZX6zcqxwhI

Ukraine is waiting for Israel to change its stance on the ongoing Russia-Ukraine war, a senior advisor to Ukrainian President Volodymyr Zelenskyy said. Speaking to the Times of Israel, David Arakhamia, said that first and foremost, the war-torn country is waiting for the Jewish administration to lift the ban on the sale of weapons to Ukraine. He emphasised that Israeli Kamikaze drones are the best in the world and that Kyiv needs to procure them to resist Russian strikes.

The United States has mobilized about three times as much support for Ukraine as the European Union, according to figures compiled by a German think tank.

The Kiel Institute for the World Economy said Wednesday that a new aid package passed by the U.S. House of Representatives takes American military, financial and humanitarian support for Ukraine to almost 43 billion euros (over $45 billion) between Jan. 24 and May 10.

Nearly hours after the Nordic countries submitted their applications to join the NATO military alliance, the UK’s Prime Minister, Boris Johnson, said he is looking forward to welcoming Finland and Sweden for taking a "historic step". "This is a historic day for our alliance & the world. Not long ago nobody would have predicted this step, but Putin’s appalling ambitions have transformed the geopolitical contours of our continent. I look forward to welcoming Finland & Sweden into the @NATO family very soon," he tweeted.

This is an historic day for our alliance & the world. Not long ago nobody would have predicted this step, but Putin’s appalling ambitions have transformed the geopolitical contours of our continent.

The local governor and head of the Donetsk Regional Military Administration, Pavlo Kyrylenko accused Russian forces of using banned phosphorus bombs on Avdiivka based schools. According to him, the incident happened on Wednesday and added people inside managed to escape before the school was burned to the ground.

People inside managed to escape before the school was burned to the ground, Pavlo Kyrylenko, the local governor and head of the Donetsk Regional Military Administration, said on May 18.

As Finland and Sweden submitted their application for NATO membership, Turkish President Tayyip Erdogan urged NATO allies to respect and support Ankara's concerns about its security. "We see that there is no such attitude towards us," he said.
Erdogan said Ankara always supported all kinds of military alliances but stressed he could not support 'yes' to every proposal. Earlier today,  NATO Secretary-General Jens Stoltenberg said that Finland and Sweden have officially applied to join the world's biggest military alliance, a move driven by security concerns over Russia's war in Ukraine.

Donetsk separatist leader Denis Pushilin said that the Azovstal plant would be demolished. This is the same plant where the Russian Defence Ministry claimed that 694 Ukrainian soldiers surrendered in the past 24 hours.

The leader of the #DPR, Pushilin, said that the #Azovstal plant would be demolished. pic.twitter.com/M0LzwQnvBF

Russian Defence Ministry shared Wednesday footage of heavy artillery firing at Ukrainian positions. The Msta-S and Akatsia-M self-propelled howitzers were said to fire at the Ukrainian armour, strongholds, and command centres. Earlier the ministry posted a video of a Tor-M2U air defence missile system in action.

Russian Defence Ministry has been requested by the country's investigative committee to provide information on “the illegal actions of Ukrainian armed formations related to the use of civilian objects for military purposes”, said the Russian ministry of defence in the latest update issued on Telegram. Without producing evidence, the ministry claimed that “the Azov Battalion used the buildings of kindergartens and schools to equip barracks."

After the bodies of at least 410 civilians recovered from towns around Ukraine's capital, Kyiv, the demand to prosecute Russian President Vladimir Putin has increased globally. The same has been echoed by UK’s foreign secretary Liz Truss while speaking to Times Radio. She said the UK is open to the idea of an international criminal tribunal trying Putin and other Russian leaders over the war in Ukraine.

Russians shelled Donetsk Oblast 28 times in the last 24 hours, destroying 52 civilian buildings, the National Police reported on May 18. One of the injured children is 9 years old.

Find out more about the UK government's response: https://t.co/7wf7eAl1Pc

The Ministry of Defense of #Russia claims that about a thousand #Ukrainian servicemen from the #Azovstal plant surrendered. pic.twitter.com/KQJOPfGR83 Ukrainian State Emergency Services on Wednesday reported a colossal fire at Chernobyl Exclusion Zone. 16 firefighters and 4 fire units were deployed in the region. 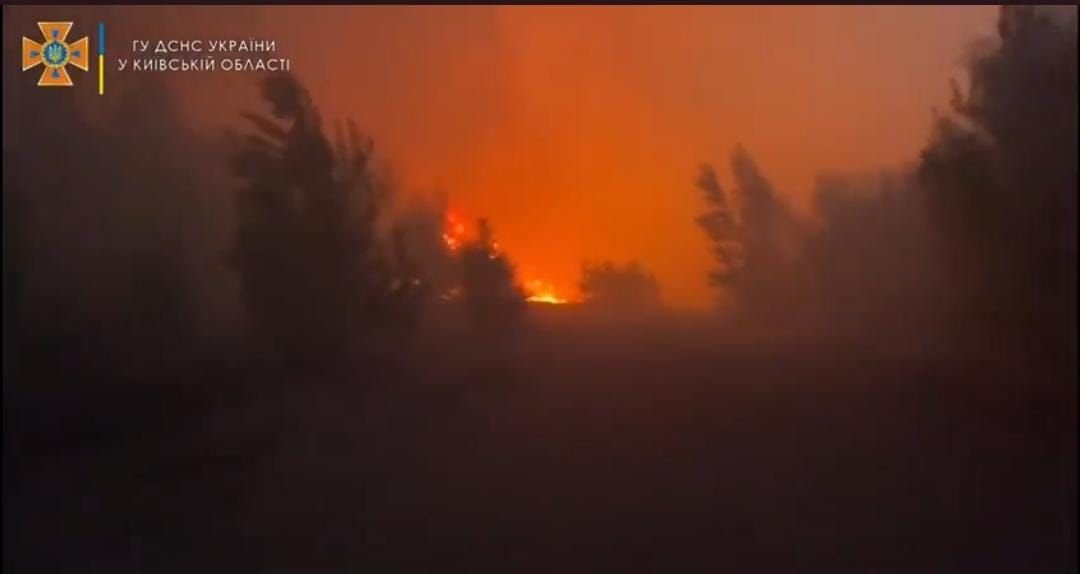 #Russian occupiers shelled #Dnipro at night. One missile was shot down by air defense, its debris fell on a private sector. In addition, a railroad facility was destroyed.

The occupants also shelled a private sector in #Mykolaiv. pic.twitter.com/PqncSoFY5n