In a massive show of support for the Afghanistan Resistance rising against Taliban, the Northern Alliance received military equipment & weapons from Tajikistan. 
In a massive show of support for the Afghanistan Resistance rising against the Taliban, the Northern Alliance received military equipment, weapons, and other supplies from Tajikistan on Monday morning. The National Resistance Front of Afghanistan, led by Ahmad Massoud has given a bloody nose to the Taliban in several districts, forcing the terrorists to surrender.

Early on August 23, the resistance forces received first support from Tajikistan as helicopters imported military equipment, guns, full ammunition, and food supplies for Massoud's army. Pictures have emerged from Afghanistan showing Tajikistan choppers dropping arms in Panjshir. The Northern Alliance has been trying to import equipment, guns, and ammunition to fight back the Taliban. 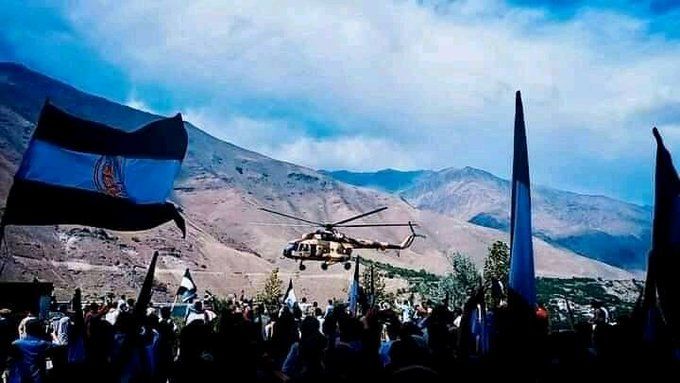 As the Taliban have gained a stronghold on Afghanistan seizing control of the Presidential palace in capital Kabul, 32-year-old resistance leader from Panjshir valley, Ahmad Massoud has been fighting back the insurgents in coordination with former Defence Minister General Bismillah Mohammadi and the ex-Vice President of Afghanistan Amrullah Saleh, who has taken in charge of the country. Massoud, who now commands the armed militia against the Taliban in the valley was joined by the former members of the country's special forces and soldiers from the Afghan army.

On Friday, August 20, the Anti-Taliban forces successfully took back control of the Banu, Pol-e-Hesar, and De Salah districts in Baghlan province, while around 60 Taliban fighters were killed or injured in the fighting. Photos and videos have been circulating on social media along with reports about the apparent clashes between the Taliban and local resistance. Ahmad Massoud has said that he has sufficient forces to mount an effective resistance but urged the Western nations to supply arms and ammunitions.

In a recent development, several Afghan civilians were seen taking to the streets demonstrating against the Taliban. The civilians came in support of the Northern Alliance and Amrullah Saleh, who has challenged the terrorist group. According to Republic TV's exclusive report, heavy fighting was reported in Andarab province, killing around 300 Talibs in the attack. The escalations in resistance against the terrorist group have also been witnessed from Kapisa located in North-East Afghanistan.

The country has been facing the worst after its government collapsed and the Taliban took over Afghanistan, followed by their President fleeing the nation. Since then, people have been desperately trying to leave the country fearing the deteriorating situation under the Taliban's control.

Meanwhile, the Taliban have been imposing strict restrictions against the citizens and have committed atrocities against them despite their promises of respecting women and minorities.